It’s difficult to say that a game like Surgeon Simulator has matured, yet in Surgeon Simulator 2: Access All Areas, Bossa Studios seems to have miraculously managed to pull it off, as this sequel is a lot more than just cracking open ribcages and dropping the heart onto the floor.

While the game may have matured over its predecessor, that’s not to say it’s any less silly mind you. On the contrary, in fact, the change to slightly janky free movement, alongside four co-op players no less, is a recipe for ludicrousness as much as it is for hilarity.

Instead of maturing in tone and becoming an actual full-on surgery simulator, Surgeon Simulator 2 has matured in design. This sequel isn’t just all about smashing rib cages open and pulling out organs in a variety of different locations, oh no, as it’s instead evolved into a fully-fledged puzzle game, with a little bit of rib cage smashing and hasty organ removal for good measure.

Alongside this dubious surgery, you’re left to uncover the mystery of ‘where do all these eerily similar bodies keep coming from’ which really seems like it should be more of a priority. While you may have signed up for some harmless medical malpractice, the wonderfully wacky story proves to be surprisingly engaging, adding a good deal of heart to the pile of literal hearts you can make on most levels.

Thankfully for everyone who’s utterly disinterested in anything that’s not putting a hammer through Bob’s ribcage, you can of course just ignore the blabbering, as there’s still a lot of –desecrating–, –decapitating–, surgery to be getting on with across game’s 11 levels which steadily increase in complexity.

When it comes down to the surgery itself, Surgeon Simulator 2 has a good deal to remove, replace, and throw around carelessly, however, the levels don’t quite progress as its predecessor did. You’ve still got all your favourite organs to play around with, alongside Bob’s arms, legs, and head now, which are surprisingly easy to snap off, but you won’t be seeing wholly new surgeries like brain, teeth, or eye transplants as the game progresses, as instead, the challenge comes in getting what you need to do surgery.

Thankfully, dealing with Bob’s surprisingly brittle body parts are more than enough trouble to keep you entertained. For better or for worse, merely brushing past Bob the wrong way can be enough to send an arm of a leg careening around the operating theatre, spilling precious blood before you can chase after it, slap it back on, and fill Bob up with tasty healing condiments.

Even as you snap his arm off for the third time in a minute, it’s hard to stay mad at loveable ol’ inanimate Bob, as watching the arm ping off and then wiggling back into place is almost always slapstick hilarity, which is where Surgeon Simulator 2 is at its best.

This slapstick comedy can be an absolute hoot, especially with three players revelling in the chaos alongside you, but it’s not always smiles and laughter as, unfortunately, it can eventually get frustrating.

When you’re engaged in a dicey surgery, or hooked in the story and eagerly awaiting the next beat, it can be more of a disappointing pain than a comedy highlight when everything goes wrong at the drop of a scalpel. Admittedly it’s still funny to watch an arm ping off and bounce into a mess of physics objects, but the slapstick just isn’t as fun when it feels like you’re the one that’s being slapped in the face.

Thankfully those moments of frustration are at least few and far between, as Bossa Studios often lean into the sillier aspects of Surgeon Simulator which make it a delight to play. With modifiers, a new feature to Surgeon Simulator 2: Access All Areas, Boss Studios lean into this even harder, with optional wacky effects such as floppy arms, crab walking, and lights out which disrupt play and make surgery near enough downright impossible, which, while fun, defeat the point of the game somewhat.

Thankfully, Surgeon Simulator 2: Access All Areas’ isn’t just the addition of these new modifiers, as new players on Steam and Xbox also have access to a year worth of user-generated content, which is the game’s crowning creative glory.

With over four hundred user-made levels, spanning surgeries, new game modes, and even a giant piano, to enjoy right away, there’s a huge amount to play and create with the robust tools which were even used to make the games campaign levels.

Unfortunately, as impressive as these tools are they’re not flawless. Surgeon Simulator 2’s physics are always going to be a little bit wobbly, and not just when the floppy arm modifier is on, so the game is constantly balancing the fine line between being charming and frustrating. Thankfully in well-crafted levels, Surgeon Simulator 2 is well on the side of charming, but occasional bugs and miss-steps can leave you teetering back on the knifes edge of enjoyment. 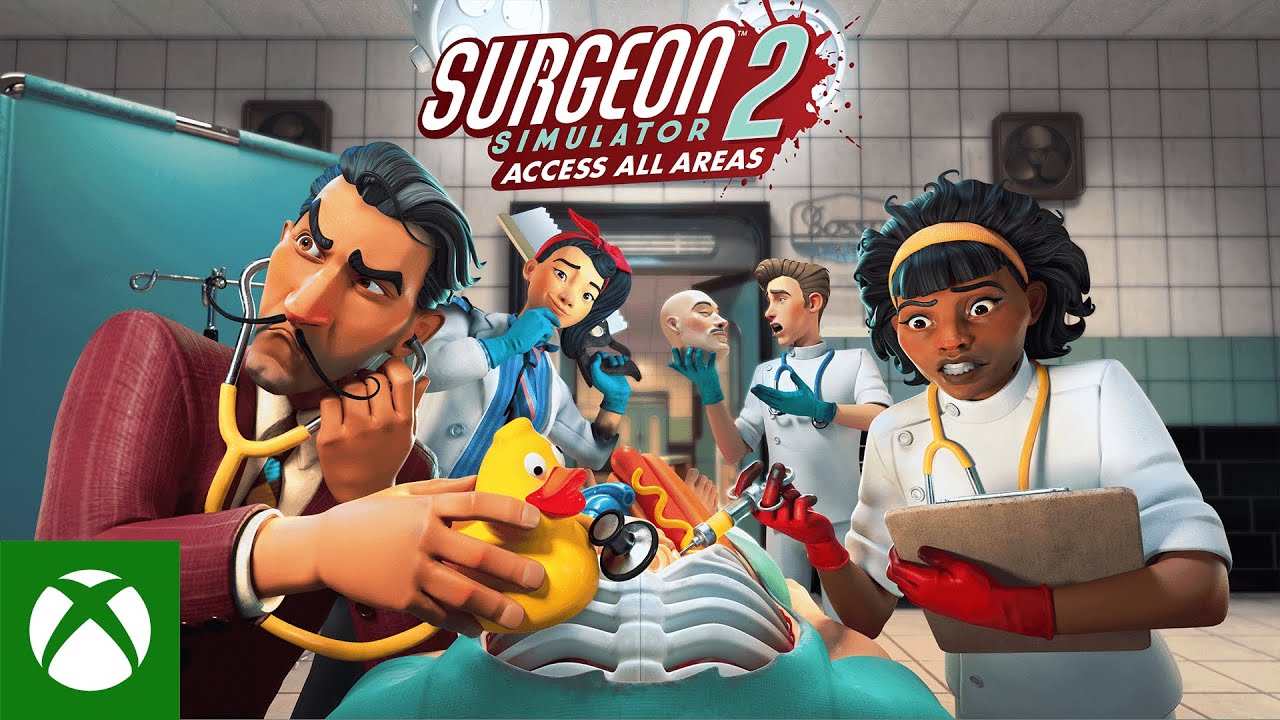 Despite its flaws and imperfections which even surgery can’t fix, Surgeon Simulator 2 manages to be a barrel of laughs that’s best had with friends. Whether it’s with the puzzles, the surgery, or in the myriad of user-created levels, it’s easy to have a good time in Surgeon Simulator 2: Access All Areas.