Despite how many games have tried to gun for its crown, I don’t think there’s been a co-op shooter that has truly dethroned Left 4 Dead. Some games have tried very hard, just look at the success of Warhammer Vermintide and its sequel, but nothing has truly beaten what Turtle Rock Studios masterfully created back in 2009.

It’s with this in mind that it doesn’t feel wrong to state that World War Z isn’t as good as Left 4 Dead, but it excites me that it’s just a hair’s breadth away from the greatly polished experience found there. Throughout its four chapters and eleven missions, there’s a sense that developer Saber Interactive know exactly what made the Valve-published shooters so memorable and enjoyable in the first place.

Each chapter here puts you in the role of a new group of survivors as you experience their stories across the world. On launch, there are four environments: New York, Jerusalem, Moscow and Tokyo. For those familiar with the 2013 Brad Pitt movie, most of these environments should be familiar. New York has the eerie, uncomfortable silence that you see at the start of the film and Jerusalem offers a tense experience as you manoeuvre through the city’s tight alleyways. Tokyo and Moscow are also here with the latter being a personal highlight.

The horror of World War Z doesn’t linger in the silent moments. In fact, silent moments as a whole are far and few between despite how unsettling they can be when done right. Most of your time will actually be spent shooting zombies – it is a co-op shooter after all. However, these zombies don’t behave like your standard undead foes in games. They’re much more deadly and far more terrifying.

Just like the movie, zombies here are vicious packs of bloodthirsty foes. They sprint, they come at you in impressively rendered hordes, they crawl atop one another in a desperate attempt to rip you to shreds. All of this gives the game a sense of scale not usually found in games of this genre. Nothing ever feels as intense as the swarms of CGI zombies in the Brad Pitt film, but they come as close as an offline rendered game can get. Video game zombies have never been this exciting before.

This linear design allows World War Z to do what both it and the movie it’s based on do best, fill your screen with hordes of bloodthirsty zombies. Utilizing the same technology that created the awe-inspiring hordes of zombies within its cinematic counterpart, World War Z creates impressive floods of undead enemies that will stop at nothing to get at you and your friends. They’ll jump from great heights, clamber atop of each other to get up high and they’ll charge you like there’s no tomorrow. Being rendered in real-time means that crowds don’t get anywhere near as large as the amazing Jerusalem Wall set piece in the movie, but they’re still impressive.

Zombies in this game are (thank the Lord) nowhere near as unstoppable as in this generation’s best zombie game Resident Evil 2. While that game saw zombies take pot-shots to the head and keep on coming, the crowds of undead here fall after just a couple of bullets. During quieter moments, you will need to shoot them in the cranium with silenced weaponry to avoid the attention of the horde, but most of your time will be spent emptying magazine after magazine into magazine into sprinting corpses.

Just like Left 4 Dead, there is a nice variety of zombie mutations that will try to ruin your day and your flesh. Screamers attract waves on zombies until you put them down, there are huge armoured zombies, hazmat zombies, zombies that creep in the dark to get you when you least expect it, and more. Each one will try their absolute hardest to ruin your plans, but great teamwork can overcome any challenge.

Teamwork is not only essential but it’s the core that holds together what might be a less satisfying experience. While playing with the AI is effective and fun, it’s playing with real people that makes everything feel so much more satisfying. Much like most multiplayer focused games we review, I spent time playing with online randoms and even that experience was fun and exciting.

The exhilarating team-based combat is incredible satisfying, although for a game that’s single purpose is combat that should be a given. Powerful audio cues that rise up against the screams and moans of the undead make you feel like you’re holding a proper weapon and the way that zombies fall upon being littered with bullets never fails to inspire a feeling of power. There’s a large number of weapons to choose from too, all with level-based upgrades. Personally, as someone who experiments with different weapons often, I found that each weapon’s XP filled up a little too slow with how many missions there actually are, but if you have a favourite few then you’ll soon see the benefits. 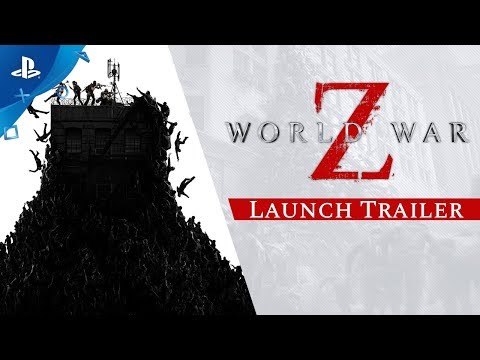 World War Z is a thrilling zombie shooter that tries its best to echo the awe-inspiring crowds seen in its cinematic interpretation. If you compare the two side-by-side, it doesn’t actually get that close, but it emulates the feeling of dread almost perfectly. With fantastic combat and some solid level design, this is the zombie co-op shooter of the generation. I just wish it had more missions.