FIFA 17 launched on Windows 10 Mobile just two weeks ago. Today, Electronic Arts released a new update for the game, introducing some major improvements for your Windows 10 Mobile device. The update includes improvements such as enhanced gameplay, including better crossing speed, accuracy, and chip short control. In addition to this, EA has also polished the Attack Mode in the game along with the different difficulty modes in Seasons, Skill Games, and Attack Mode. Another interesting change in the update is the improved pitch view which is apparently wider with the latest update. 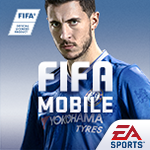