This review of Asseto Corsa Competizione was conducted on a base Xbox One by Kurt Perry.

The racing simulation sub-genre has grown tremendously over the last five years or so. Racing games that were once considered sims like Forza and Gran Turismo have transitioned to simcade status whilst core racers like Project CARS and DiRT Rally stand front and center stage. Needless to say, a modern sim racer fan has plenty of options to choose from.

Taking this into consideration, launching a new racing sim into the market is no easy feat. You need a unique selling point, seamless gameplay, satisfying handling model, a plethora of diverse content, and detailed customization options. The question is, how well does Kunos Simulazioni’s Asseto Corsa Competizione manage to achieve all of these goals?

If you’re looking to pick up Competizione as a single-player title, you’ll probably be spending most of your time in the career mode. Let me preface this by making something very clear. As with many other racing sims, the career mode here is somewhat lackluster. Effectively, you work your way through the real-life GT calendar which includes various iconic circuits like Spa, Monza, and Brands Hatch.

Between the races themselves, you are required to qualify for a starting grid position and conduct a variety of tests for your team. These tests are simple enough and usually involve something like making sure your car’s brakes feel right or that your tires are in good condition. Truth be told, these aren’t overly interesting and generally just have you completing meaningless hot laps.

Perhaps the most strange oversight with career mode is that it doesn’t feature championship points of any kind. There isn’t either a driver’s or constructor’s championship to fight for. You are basically just racing because you enjoy racing. I’m not saying that’s not a good enough reason but I can’t see more casual fans staying interested for too long.

Outside of career mode, you have the choice to pick from Championship, Special Events, and Multiplayer. The Championship mode is similar to Career but also gives players options to modify and customize their experience. You can pick between two different GT classes as well as specify season length, weather variety, and much more. There is a third GT series available but it’s locked behind the Intercontinental GT Pack which can only be purchased through Competizione’s season pass.

As for the Special Events, they ironically aren’t all that special at all. In fact, they’re basically just glorified leaderboard time trials where you’re tasked to set the best lap possible in a specific car. This can provide a useful challenge for skilled players but otherwise fails to offer much in terms of rewards.

Those looking to play Asseto Corsa Competizione long-term are probably most interested in its multiplayer. Multiplayer is split up into three different core game modes: quick join, server list, and competitive. The first two are self-explanatory but competitive isn’t as straightforward as you might expect.

Asseto Corsa Competizione features one of the most interesting skill rating systems I have ever seen. Throughout your adventures racing the game will automatically score you on seven different categories. These are track competence, consistency, car control, pace, safety, racecraft, and competition.

In order to even began racing in competitive lobbies, there is a minimum requirement for both track competence and safety. Track competence is a measurement of how good your knowledge is of Competizione’s 11 vanilla tracks. You earn track competence rating by completing several clean laps on every circuit.

Similarly, safety is a measurement of how safe you are when driving near other racers. This is earned by avoiding unnecessary crashes and staying calm when attempting defensive maneuvers or overtakes. Asseto Corsa will try to match you with other drivers of similar safety rating. This means if you have a low safety rating, expect to be punished with toxic lobbies and kids trying to crash you off at every corner.

This system is fantastic as it eliminates the problem many other racing games have. Those who want serious, competitive racing often have to resort to third-party eSports communities that properly enforce racing regulations. However, thanks to this SR system and Competizione’s generally excellent competitive mode, public lobbies can offer some top-tier racing. Although, you will have to grind your numbers up to get into those good lobbies.

There is a serious argument to be made that Asseto Corsa Competizione might be the most satisfying feeling sim racer on the market. At least, in terms of how the cars feel to drive. In my time playing, I found the natural feedback offered here is far superior to anything the Project CARS franchise has ever featured. There’s just something very natural feeling about the driving that makes identifying your weaknesses easy to do.

Also, I went into this expecting I’d have to pull out my racing wheel and pedals every time I wanted to play but this wasn’t the case. Okay, Asseto Corsa certainly benefits from the ownership of a proper wheel but it’s very serviceable on a controller. You will have to mess around with the settings a little bit but with some tweaking, you can definitely gain some serious pace without having to splash out on a shiny new wheel.

The lack of different racing disciplines is usually something I’m against in racing game but Competizione does do it better than the likes of F1 2019 and MotoGP 20. Each one of the __ available GT cars feels genuinely unique. You can’t just start in an Aston Martin and jump into Lamborghini and expect them both to drive the same. You are tasked with learning both the tracks and the cars and that’s not something many other racing games are particularly good at.

This last point may not be that important to most players, but it is something I highly appreciate. Asseto Corsa Competizione features full binding options for just about every input imaginable in a racing game. There’s the usual stuff like shifting up and down but you can bind wilder things like on the go traction control adjustment, your rain light, indicators, and even perform manual windscreen wiping. It’s a beautiful level of player choice that I believe all console games would benefit from having.

And now we move onto the caveat of owning Asseto Corsa on a console. Asseto Corsa Competizione runs at a rough and inconsistent 30 FPS. Now before you get your pitchforks and accuse me of being an FPS elitist, I actually believe 30 FPS can work if done right. Some genres aren’t dependent on high frame rates and clever tricks, as seen in the likes of Forza Horizon 4’s Quality Mode, can make lower frame rates feel surprisingly smooth.

However, none of that is present here. Competizione suffers from some serious performance issues that bottleneck almost everything good about its otherwise very enjoyable racing experience. If you’re lucky, the game will sit at a somewhat consistent 30 FPS. This is not usually the case. My testing showed regular drops into the mid-20s in the dry. At worst, in harsh weather like thunderstorms, I had occasional drops as low as 20 FPS.

You might argue that whilst it’s unideal, such performance should be expected on a first-generation Xbox One. However, it turns out Xbox One X owners aren’t getting a much better deal either. Of course, the Xbox One X version of Asseto Corsa is a nicer looking game. Instead of the base console’s 900p resolution, you can a far sharper 2160p instead. This is great but at that resolution, Competizione is still locked at 30 FPS. To top all this off, I experienced a bizarre bug where my game’s already sub-par frame rate would die for 10 seconds mid-race multiple times in my playthrough.

At least as of right now, there is no option to drop the resolution for a better frame rate. This is a disaster from a competitive point of view. When racing sim fans are already spoiled for choice why would they opt for a choppy 30 FPS experience? Also, the console version is capped at just 20 drivers on the field at once. This is irritating for two reasons. For one, the PC version has full support for up to 50 drivers. Secondly, the real-life Blancpain GT Series, that this is supposed to be the official game for, regularly sees several more drivers racing at once than this game allows. 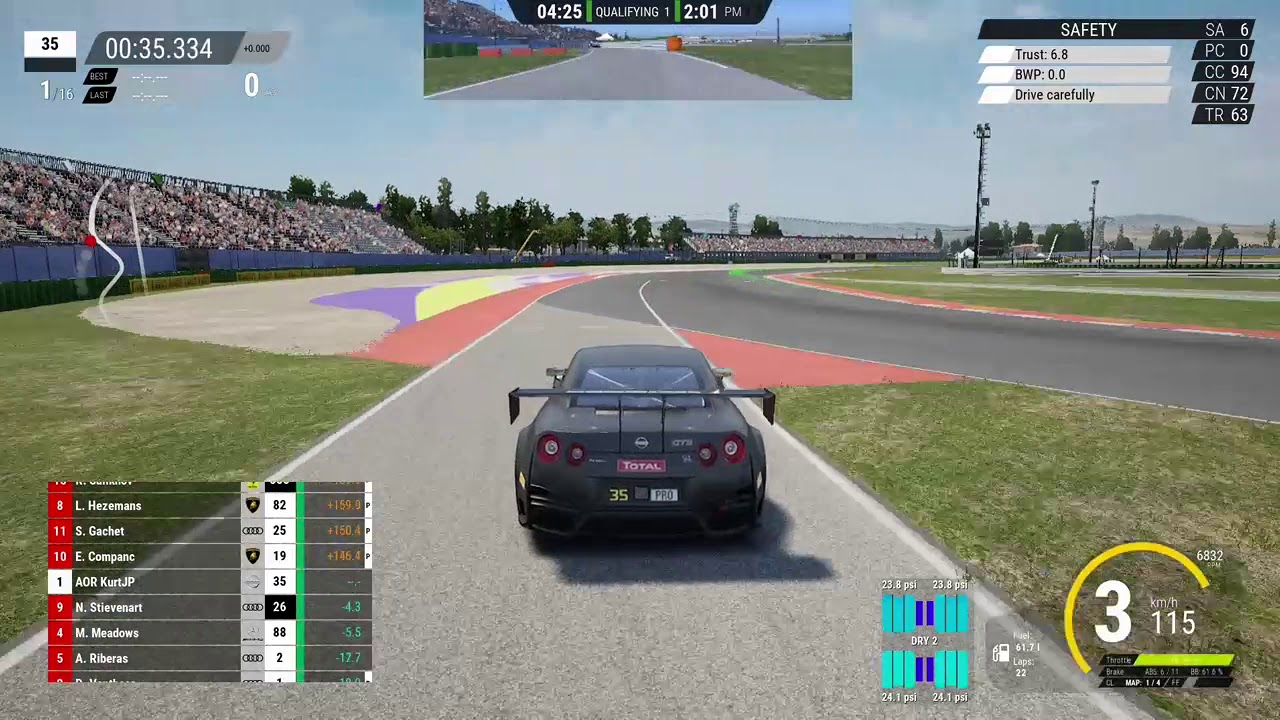 Asseto Corsa Competizione is one of the most frustrating racing games I’ve ever played. Kunos Simulazioni has done so much right from its satisfying driving to its industry-leading multiplayer design, but a lot of this doesn’t really matter. At the end of the day, if your hardcore racing simulator runs at an inconsistent, unlocked 30 FPS, there’s not much reason to play it. I found myself getting headaches during longer play sessions and even debating skipping rainy track days altogether. If the developer adds a 60 FPS option for Xbox One X, I wholeheartedly recommend picking Competizione up. Unfortunately though, as things stand, Asseto Corsa is outraced by just about everything else on the track.

Best Devices to Watch the World Cup On

Deal Alert: save $200 on Microsoft Surface Pro 9 at Amazon