Shadow Warrior 2 is a thrilling first-person shooter which centers around crude humor, over-the-top violence and Asian mythology. While the original Shadow Warrior told a more concise story, its sequel features an unprecedented amount of insanity. Not only are the characters quirkier, but the world is completely destroyed due to the protagonist’s—Lo Wang’s—actions during the first game. He usually ends up making a situation even worse.

Shadow Warrior 2 takes place 5 years after the events of the original. For those unfamiliar with the story, by breaking the seals to the Shadow Realm, Lo Wang caused Earth and the world of gods and demons to fuse together. Now, demons live together with humans and gangs control resources like tea. It’s definitely a bleak future but that’s just the start of your problems. Orochi Zilla, Lo Wang’s archenemy, is back and want to destroy the the planet again. It’s up to you to stop him. 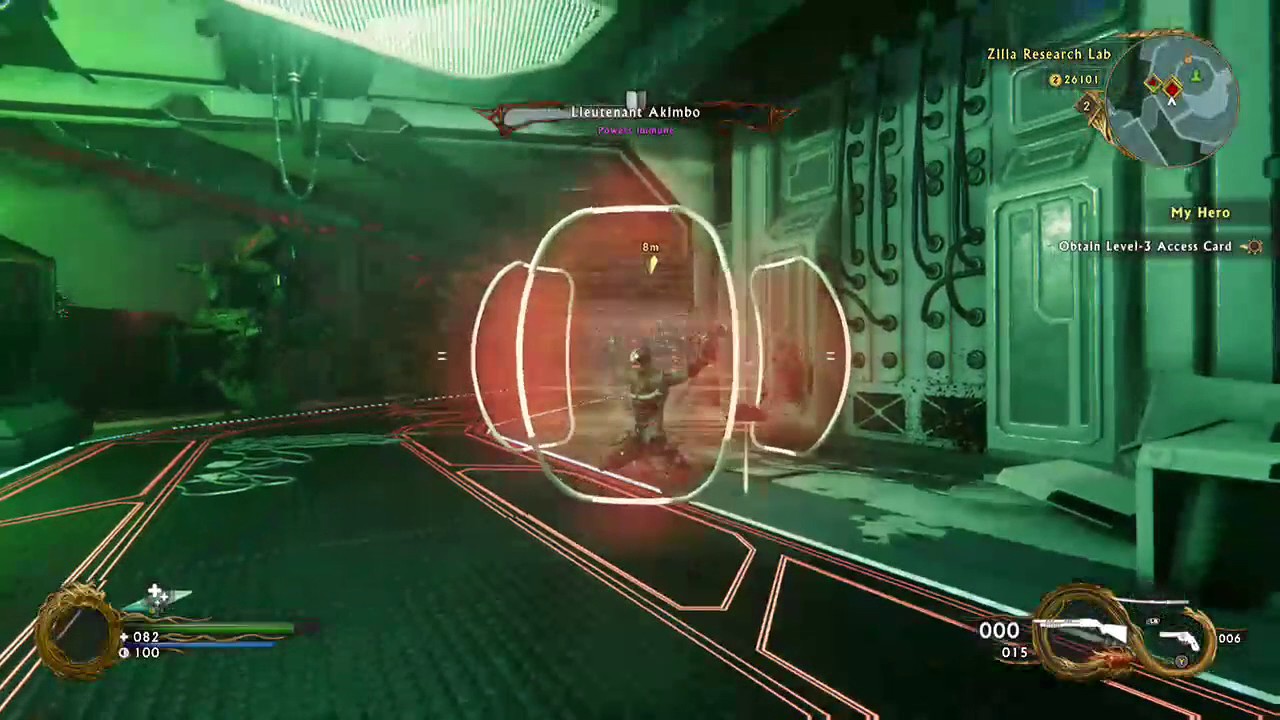 For those who are easily offended, Shadow Warrior 2 may not be the game for you. The title features very crass dialogue, copious amounts of inappropriate jokes, obscene gestures, and other elements which are insensitive to many groups of people. Imagine if a show like Family Guy was turned into a first-person shooter. Shadow Warrior 2 is basically that game.

The title revolves around Lo Wang saving a girl named Kamiko from Orochi Zilla’s laboratory. Kamiko’s soul is transplanted into Wang’s body and the adventure begins. Gamers won’t be picking up Shadow Warrior 2 for its story though—which is convoluted and hard to understand at times. They’ll buy this game for the intense action and gore! Just like its predecessor, the game focuses on gunplay and melee combat. The title has some of the best shooting mechanics in the industry despite only running at 30 FPS on Xbox One.

Shadow Warrior 2 is a gorgeous game and definitely one of the best-looking titles on the console. Despite its slightly blurry appearance—which is easily remedied by turning off motion blur and other obstructive effects—it features gorgeous models when it comes to your weapons and foes. While characters’ faces may look like they’re out of a child’s sketchbook, they don’t necessarily detract from the experience because you’ll be fighting grotesque creatures most of the time. Still, the faces could’ve easily been improved with some more work by the developers.

Not only does Lo Wang have added movement abilities like the double jump, the environments are procedurally generated so there’s endless replayability. All of the levels are basically massive arenas filled with enemies and secrets. The purpose of the game is to collect upgrades, acquire skill points, and basically cause as much carnage as possible. You can use all of these parts to improve your weapons and constitution, so that you can take on even more challenging and deadlier enemies.

Shadow Warrior 2 allows for a great degree of customization because there are endless weapons and combinations. For example, you can equip your sword with various charms which can give it toxic or electrical damage. You can also make it so you regenerate health with every strike. There are a seemingly infinite number of options which transform the game into a truly personal shooter. You can play the way you want to play…use the powers you feel are the best.

The biggest addition to Shadow Warrior 2 has to be co-op. You can team up with 3 friends and fight demonic hordes together. Not only does this make the experience much more enjoyable, it’s also a great lesson as to how others tackle certain situations. Every player utilizes different weapons and skills when fighting the game’s titanic bosses so teaming up acts as a learning experience.

Despite all of the game’s positives, there are some significant issues when it comes to the title’s performance on Xbox One. The frame rate isn’t stable and frequently drops below 30 FPS. While it’s nowhere near as horrendous as a game like Sniper: Ghost Warrior 3, the stuttering is still noticeable because every other part is so good. Shadow Warrior 2 could definitely use a little bit more optimization. However, even if you pick it up today, you won’t have any serious problems. Optimization should be a long-term goal for the team at Flying Wild Hog.

There is one serious glitch that needs to be addressed though. Sometimes when the action gets a little too intense, it seem as those Lo Wang’s feet clip through the ground. This gives the impression that the title is stuttering but in reality you just can’t move as you’re glued to the floor. Entering a new area or jumping solves this but it’s still a serious bug which needs to be squashed as soon as possible.

Overall, Shadow Warrior 2 is a fun and frantic experience. While the narrative isn’t on the level of the original, the combat is definitely a step above many first-person titles on the market today. Games like Halo 5: Guardians and Titanfall 2 could learn from Shadow Warrior 2 because it exudes charm and personality. If you’ve never played Shadow Warrior before, now’s the right time to get in because the launch edition comes with the original game for free. Every Xbox One owner should buy this title. There’s no need to second guess.