If you’ve played anywhere near as much of the Skate franchise as I have or any of the past OlliOlli games, you’ll be in familiar, if inverted, territory with OlliOlli World. That is to say, OlliOlli World is a skateboarding game, and we’ve had the formula for those down for years now.

As you might then expect from a skateboarding game, OlliOlli World features plenty of tricks, grabs, grinds and spins, with the surprisingly frequent wallride thrown in for good measure. With plenty to do in OlliOlli World’s 2.5D environments, it’s hardly about just racking up a high score with the vast variety of tricks at your fingertips, but we’re not exactly going to stop until we’ve claimed that top spot on the scoreboards either way.

In pursuit of those ever-elusive high scores, I’m unashamed to say that multiple times throughout the digital hands-on event I completely forgot that I was actually meant to be previewing OlliOlli World. Instead, I was transfixed on landing that perfect trick, nailing that grind, and finally beating out my rival smugly placed at the start of the course.

Once I finally snapped out of this trance, I realized that this might have just been the mythical Flow-State that developer Roll7 speaks of. As a bizarre mix of zen scenery admiring and button-mashing controller-gripping fury, OlliOlli World can easily make time disappear into a haze, as the level’s perfectly crafted routes demand to be carved as if it’s some unshakable primal urge.

To make OlliOlli World even more unshakably entrancing there’s not even just one route per level, as, after some tutorials, you’ll be given additional gnarlier routes to choose from within many of the levels. Not only do these aptly named “gnarly routes” house tricker sequences for more score potential, they’re also a path towards many of the game’s optional side quests, giving you even more OlliOlli-ing to do.

The alternative, increasingly complex, twisting routes in OlliOlli World also lead into many of the game’s additional challenges, a trio of which are available throughout each level. These challenges range from the easier tasks of just completing a few varied tricks, to downright devilish tests of dexterity that’ll have you on the edge of your seat and lamenting your thumbs for not being quick enough.

If the satisfaction of utterly crushing a level isn’t enough to already have you clad in kneepads and a fetching helmet for when the game releases then you’re in luck, as OlliOlli World also features a wardrobe full of cosmetic rewards. They can be difficult to get at times, but with rewards that let you dress up as anything from a businessman to a bumblebee, it’s hard not to marvel at the extensive customisation options that you get to play with.

Unfortunately, while each of OlliOlli World’s levels is packed with content, in the three biomes that we’ve had access to we can’t say that there’s all too many of them to enjoy. Thankfully, if you don’t want to tirelessly grind in pursuit of perfection through the handcrafted levels on offer, OlliOli World also features the Gnarvana Portal. This level creator does boast near infinite replayability, however, levels never reach the same heights as those in the campaign, so it’ll be up to the community post-launch to generate and share the levels actually worth your time.

There’s also the asynchronous ranked multiplayer of the Gnarvana League, in which you can compete with other players to be the best on a spot each day if you want to get utterly embarrassed by someone impossibly better than yourself.

In spite of how overwhelmingly controller smashingly complex OlliOlli World may appear at times, the game is remarkably more approachable than its predecessors, and not just because of its charming new 2.5D look. The surprisingly difficult need to press A when you land a trick from past games has been functionally all but removed, and a smattering of checkpoints per level will help out those new to the game without hindering the OlliOlli veterans who’re after a seamless unbroken combo that spans an entire level.

The skating skill floor may have been considerably lowered, however, the tutorials which teach you core skating fundamentals have been bafflingly spread throughout Radlandia’s many biomes. It took me five hours, a trip to the ranked multiplayer Gnarvana League replays, and an admittedly overdue peek at the options menu to even realize that you could very easily manual, which just feels not on.

I know in hindsight I should be ashamed of how long it took me to realize this simple fact, however, in my defence, Roll7 has made it incredibly easy to feel like you’re doing a good job in OlliOlli World. Score thresholds are surprisingly low and the eccentric cast of dorky characters who follow you around endlessly spouting positivity make sure you’re enjoying yourself no matter how many times you stack it on a level.

There’s also what might just be the most funky fresh soundtrack in all of gaming. 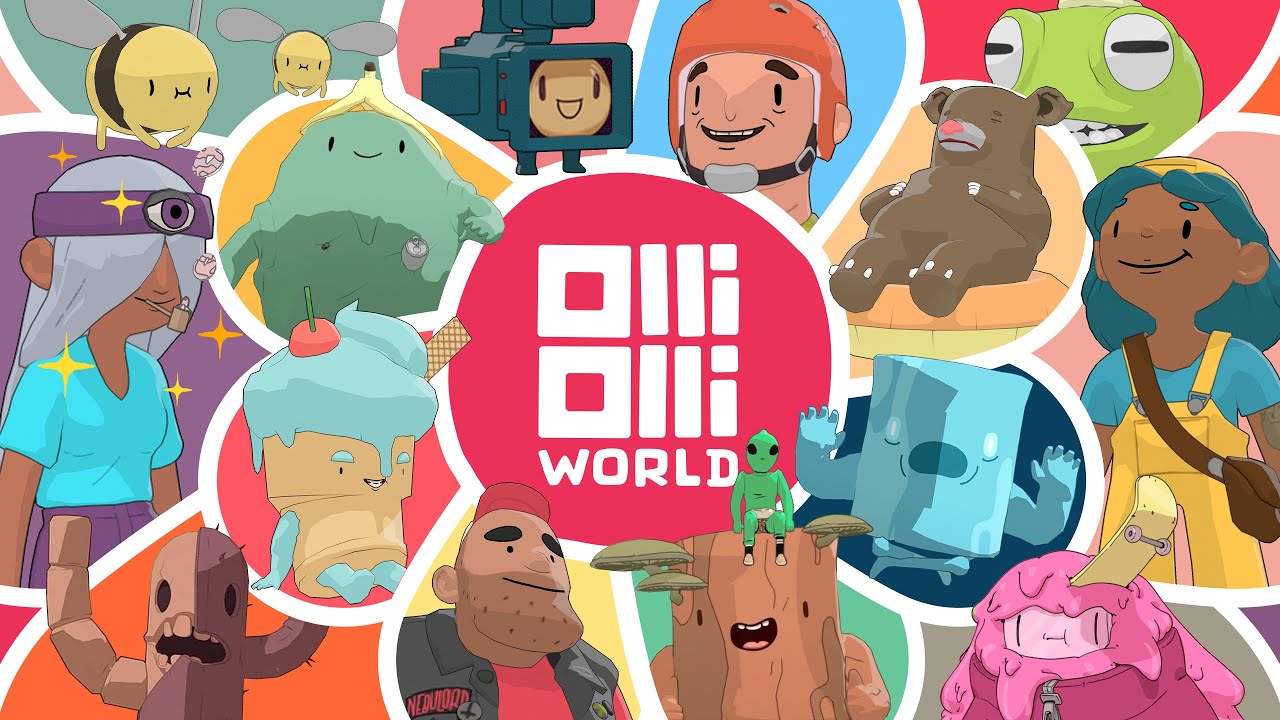 Even after being stretched into another half of a dimension, the OlliOlli core experience hasn’t been diluted in the slightest. The skill ceiling remains as high as ever for veteran Olli-ers and for once, new players won’t be cast out and shunned for forgetting manuals exist or wearing the wrong pair of checkerboard vans.

OlliOlli World releases next month on the 8th of February for the PlayStation 4, PlayStation 5, Xbox One, Xbox Series X|S, Nintendo Switch, and PC.