After dominating the smartphone SoC market, Qualcomm plans to work its way to the PC market as well. The company is working on a high-end processor for PCs running on Windows 10.

The new SoC popped up on Geekbench listing a few days back. The new chipset is called Qualcomm “Snapdragon 1000” or “SC8180” and it supports Windows 10 for ARM. The chipset supports 15-watt which is much higher than the existing Snapdragon 835.  According to Geekbench, the processor has eight CPU cores, which are likely to be based on a modified version of the ARM Cortex-A75 or -A76 architecture. The processor is clocked at 1.96 GHz and has 8 GB RAM listed on the test system. The operating system listed on Geekbench is Windows 10 Home (32-bit). On the benchmark test, the processor scored 1392 points for the single-core performance, while it scored 4286 points on the multi-core test. 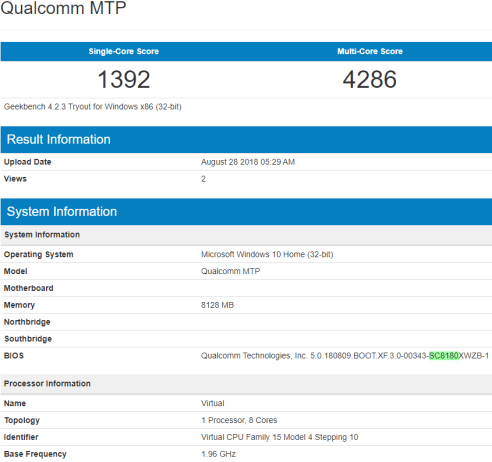 Qualcomm is rumoured to launch the new processor next year probably during CES 2019. According to a report, ASUS will be one of the first companies to use Qualcomm’s SoC in their laptop lineup codenamed “Primus”.