IDC data is a bit different from that of the Gartner. According to IDC, the Q4 shipments came in at 71.8 million units, which represents 4.8 percent growth. A total of 266.69 million PCs have been shipped which means — that’s 2.7 percent growth year-over-year.

Gartner’s data is slightly different from that of the IDC because of their different methodologies in calculating the shipments. “Gartner’s data includes desk-based PCs, notebook PCs and ultramobile premiums (such as Microsoft Surface), but not Chromebooks or iPads. IDC counts desktops, notebooks (including Chromebooks) and workstations, but not tablets or x86 Servers,” ZDNet reported.

“The PC market experienced growth for the first time since 2011, driven by vibrant business demand for Windows 10 upgrades, particularly in the U.S., EMEA, and Japan,” Mikako Kitagawa, senior principal analyst at Gartner, said in a statement. “We expect this growth to continue through this year even after Windows 7 support comes to an end this month, as many businesses in emerging regions such as China, Eurasia and the emerging Asia/Pacific have not yet upgraded.” 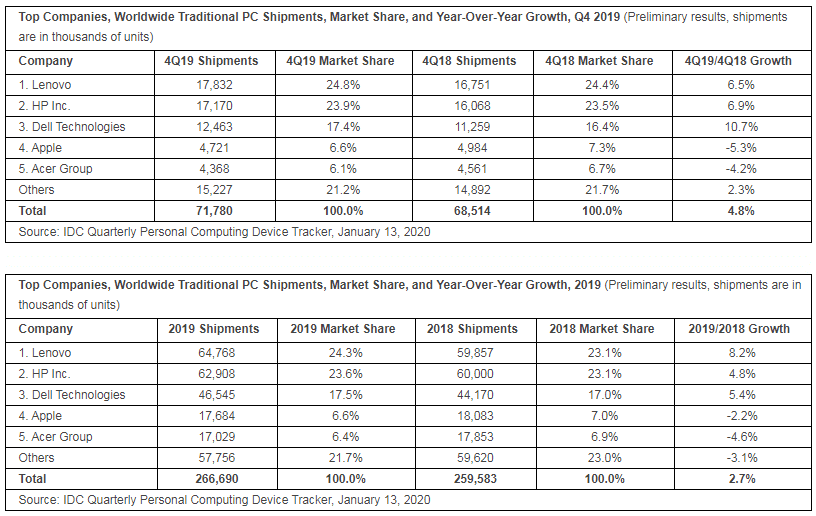 Interestingly enough, Mac sales in Q4 declined 5.3 percent year-over-year, as per IDC.  For the full year, Shipment volumes were down 2.2 percent.