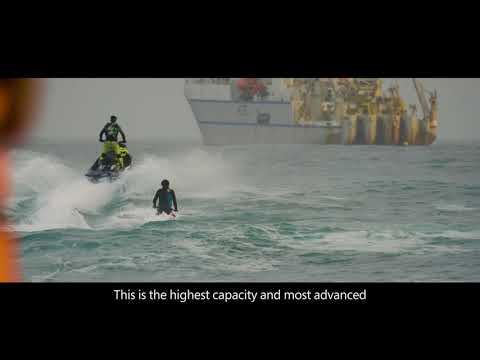 Microsoft, Facebook and global telecommunication infrastructure company Telxius today announced the completion of highest-capacity subsea cable to ever cross the Atlantic. It connects Virgina Beach in the US, to Bilbao in Spain. Dubbed Spanish for “tide”, Marea can transfer up to 160 terabits of data per second. To put that in a perspective, it is 16 million times faster than the average home internet connection.

Marea’s cable contains eight pairs of fiber optic cables encircled by copper, a hard-plastic protective layer and a waterproof coating. While some parts of it are buried under the ground to protect the cable from fishing and ship traffic, most of the cable lays on the ocean floor.

“Marea comes at a critical time,” says Brad Smith, president of Microsoft. “Submarine cables in the Atlantic already carry 55 percent more data than trans-Pacific routes and 40 percent more data than between the U.S. and Latin America. There is no question that the demand for data flows across the Atlantic will continue to increase and Marea will provide a critical connection for the United States, Spain, and beyond.”

Marea will help Microsoft to meet customer demand in offering reliable, high-speed connections for its various cloud services, including Bing, Azure, Office 365, Skype, Xbox Live, and more. Marea will be operational from early 2018.

Learn more about this project here.