Pinned tabs will now always show their pin icon, even while inactive, to make them easier to identify. If an editor is both pinned and contains unsaved changes, the icon reflects both states.

Instead of using the native tooltip in extension tree views, we now use a custom hover that is consistent cross-platform and fits better with the overall UX.

Install an extension without synchronizing#

You can now install an extension without synchronizing it while settings sync is enabled.

Install an extension from Explorer#

VS Code now supports installing an extension VSIX file from the Explorer by right-clicking on a VSIX file and choosing the Install Extension VSIX context menu item.

A new internal workbench.action.blur command is now available, which removes focus from any focusable input. You can assign a keyboard shortcut for this command in the Keyboard Shortcuts Preferences.

Making modifications in the terminal traditionally requires information to be sent to the terminal process, processed, and returned to VS Code in order to be affected. This can be slow when working on a poor or distant connection to an SSH server or Codespace.

This release adds a “local echo” mode to the terminal, which attempts to predict modifications and cursor movements made locally and show them in the UI without requiring a round trip to the server. By default, predicted characters show as “dimmed”:

There are two settings you can use to configure this:

This milestone, we’ve made several improvements to the suggestions UI. First and foremost, it can now be resized. Drag the sides or corners to resize the control.

The size of the suggestions list will be saved and restored across sessions. The size of the details pane is only saved per session, since that size tends to be more variable. Also, the editor.suggest.maxVisibleSuggestions setting has become obsolete.

The suggestions control can now also show its own status bar at the bottom of the window. Enable it using the editor.suggest.showStatusBar setting. It makes toggling details simpler, and shows if a completion supports inserting, replacing, or both.

The new editor.suggest.insertMode setting allows you to configure whether you prefer insert or replace. When a suggestion supports both, your preference will be the default.

Last but not least, you can now move the cursor while suggestions are showing. For instance, you can trigger suggestions at the end of a word, move left to see more suggestions, and then use replace to overwrite the word.

Custom snippets in Emmet are back. Additionally, snippets now automatically refresh upon saving the snippets file or updating the emmet.extensionsPath setting.

This addresses a feature request to navigate SCM commit history. Press Up and Down to display the prior and next commits, respectively. To move directly to the first and last position of the input box, press Alt in conjunction with the corresponding arrow key.

Tag related Git commands have been added to the … Git menu. 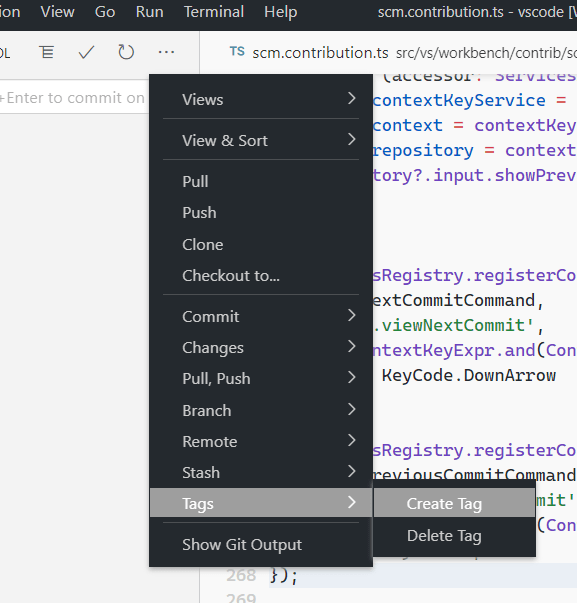 A new Git: Rebase branch… command has been added which lets you rebase a branch using the UI.

With the Git: Clone (Recursive) command, you can now recursively clone Git repositories, including its nested Git submodules.

We now render emoji shortcodes, such as :smile:, in the Timeline View. 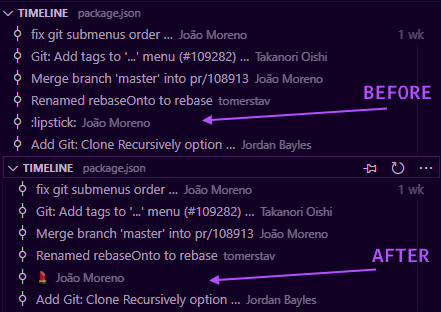 Selection applies to the following, and follows a traditional hierarchical pattern:

The new javascript.format.insertSpaceAfterOpeningAndBeforeClosingEmptyBraces and typescript.format.insertSpaceAfterOpeningAndBeforeClosingEmptyBraces formatting configuration option controls if spaces are inserted between empty braces. The default value for these settings is true. For example, for the JavaScript:

Setting "javascript.format.insertSpaceAfterOpeningAndBeforeClosingEmptyBraces": false and formatting the code results in:

Leveraging the new File System Access API, Microsoft VS Code running in a browser can now offer a download action for folders from the File Explorer to download all files and folders to disk.

Note: This requires a recent version of Microsoft Edge or Google Chrome.

If you open a folder that contains .code-workspace files at the top level, you’ll now see a notification asking you to open it. This was always the case in Microsoft VS Code for desktop, and will now work in the browser too.

A new setting window.confirmBeforeClose was added to show a confirmation dialog before closing or leaving the workbench.

Note: This setting may not cover all cases. Browsers may still decide to close a tab or window without confirmation.

Work continues on the GitHub Pull Requests and Issues extension, which allows you to work on, create, and manage pull requests and issues.

To learn about all the new features and updates, you can see the full changelog for the 0.22.0 release of the extension.

Work continues on the Remote Development extensions, which allow you to use a container, remote machine, or the Windows Subsystem for Linux (WSL) as a full-featured development environment.

Feature highlights in 1.51 include:

You can learn about new extension features and bug fixes in the Remote Development release notes.

Preview features are not ready for release but are functional enough to use. We welcome your early feedback while they are under development.

We are overhauling the login dialog that shows when a network connection requires authentication with a proxy. A new setting, window.enableExperimentalProxyLoginDialog: true, will enable this new experience that we plan to make the default in a future release. 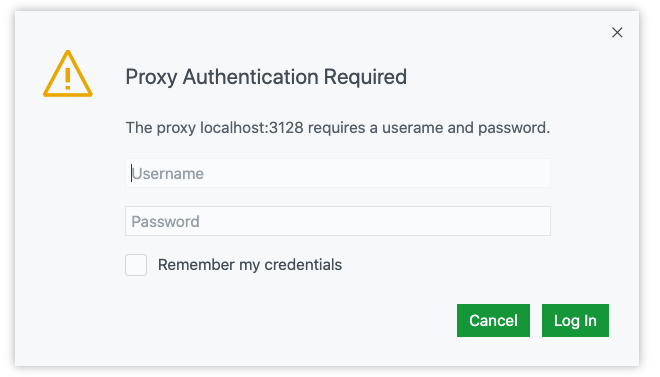 The dialog will appear inside the Microsoft VS Code window and offer a way to remember the credentials so that you do not have to provide them each time you start VS Code. Credentials will be stored in the OS standard credential store (keychain on macOS, Windows Credential Manager on Windows, and gnome keyring on Linux).

We still only show this dialog once per session, but might revisit this decision in the future. You will see the dialog appear again in case the credentials you selected to be remembered are not valid. Providing them again allows you to change them.

Please enable this option and let us know if something does not work as expected through our issue tracker.

Microsoft VS Code supports the TypeScript 4.1 beta and nightly builds. The 4.1 update brings some new TypeScript language features, such as support for recursive conditional types, as well as tooling improvements. One focus area has been adding initial support for @see tags in JSDoc comments.

We’ve updated some of our extension samples to include Microsoft VS Code default styles that are hooked up to our color theme tokens. This means that common elements (text, buttons, inputs) will be themeable and match the default styles in the product. Below are the extensions that include this:

With the finalization of the ThemeIcon color API, extension authors can use theme colors on codicons in custom tree views.

Extensions can now sync their global state by providing the keys, whose values should be synchronized when Settings Sync is enabled, using the newly introduced setKeysForSync API in globalState memento.

Every milestone comes with new proposed APIs and extension authors can try them out. As always, we want your feedback. This is what you have to do to try out a proposed API:

You cannot publish an extension that uses a proposed API. There may be breaking changes in the next release and we never want to break existing extensions.

Folding range providers can signal to the editor that folding ranges need to be updated using the onDidChangeFoldingRanges event.

For more details and to provide feedback, please use issue #108929.

As part of continued work on Authentication Providers, we have introduced API for storing and retrieving sensitive information. Internally, this acts as a wrapper of the keytar library that VS Code uses for storing secrets.

We have continued the effort to make VS Code “Trusted Types” compliant. The goal is to prevent DOM-based cross site scripting vulnerabilities. You can learn more about trusted types at the web.dev Trusted Types site and follow our progress in issue #103699.