Computerworld reports on rumours that Steve Ballmer’s upcoming and untimely retirement was the result of the Surface RT disaster, which saw more than $900 million written off.

"He was definitely pushed out by the board," said Patrick Moorhead, principal analyst with Moor Insights & Strategy, in an interview Friday. "They either drove him out, or put him in a situation where he felt he had to leave to save face."

Steve Ballmer had previously said he intended to remain CEO of Microsoft until 2018, but announced last week he intends to retire in only 12 months.

"Typically, a board will be working behind the scenes for a replacement, but they’ve given themselves 12 months," said Moorhead. "I think this went down very quickly."

In his email to Microsoft employees he wrote:

"This is an emotional and difficult thing for me to do. I take this step in the best interests of the company I love.”

Moorhead was clear in blaming the Surface RT write-down as the precipitant.

"It was the $900 million write-down. That caught the attention of the board, and based on Ballmer’s over-enthusiastic public commentary on Windows RT and Surface RT, they lost a lot of credibility. So did Ballmer. How can you be that far off what consumers want? Was it that you’re not listening to your team? Was it because the team was afraid to give him advice? Was it because the team saw a different reality? Or was it that the team lacked the skill set to anticipate the failure?"

"He has been looking for the right time to retire for a long time, the right person to hand the reins to," said David Cearley of Gartner. "I think it’s very likely that Ballmer’s decision [to retire] is part of a broader strategy within Microsoft as expressed by the reorganization in July that is geared toward shifting the corporate culture."

"They came to the decision that this overall strategy required bringing in a new CEO who can execute from the beginning to put their own imprint on that strategy," said Cearley.

The last 12 months has demonstrated that Microsoft is very out of touch with the market, seen particularly in the pricing of the Surface RT tablet, which should have been priced significantly cheaper than the iPad, given the lack of apps for the platform at the time, and more recently with repeated changes in Windows 8 and the Xbox One in response to consumer outrage.

Hopefully a new Microsoft will pay more attention to getting it right from the start rather than having to change course mid-stream repeatedly. 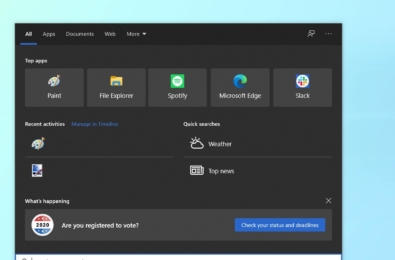 Microsoft pushes US Election info via Windows Search, even if you are outside USA