ROG Zephyrus Duo 15 Review: An Absolute Beast In All Areas

Have you ever wished that your laptop had more pizazz? Do you look at multi-monitor setups with envy as you lament their productivity? Do you have a spare three grand kicking about behind couch cushions? If you answered yes to any and all of these questions, then the ROG Zephyrus Duo may well just be for you!

Even before getting booting up the ROG Zephyrus Duo, you can tell it’s a machine that means business. Thankfully, for once, that’s not the usual gaming laptop business of “tasteful” RGB lighting throughout every corner of its design. Instead, the Zephyrus Duo looks beautifully sleek with a minimal Space Grey with mirror logo finish that you wouldn’t mind slapping out in a meeting, office or lengthy train journey.

Yet, from the sheer absolute heft of this lad, not to mention the pretty sizable price tag that goes along with even the most basics of specs, there’s no doubt that what’s inside is powerful stuff. Weighing in at 5.3 lbs, it’s far from the most portable a 15-Inch laptop has ever been, but it’s more than manageable to deal with on travels short or long.

It’s when you actually turn on the laptop that the ROG Zephyrus Duo truly comes into its own. Not only do you get that crisp goodness of a 4K UHD panel – or a lightning fast 300hz 1080p HD display if you’re after the blistering FPS that the Zephyrus Duo can deliver – but you’re also greeted with the marvel of the ScreenPad Plus.

As you open up the Zephyrus Duo, the ScreenPad Plus rises up a few degrees off the main body of the laptop, greeting you through a superfluous boot sequence complete with fancy animations. With the pitched angle giving far improved viewing angles from the first iteration of the Zephyrus Duo, it’s now far more usable as an actual second screen, allowing for the increased productivity and media consumption we all crave.

While having a second display for additional information is always a treat, the ScreenPad Plus’ responsive touchscreen capabilities slap the extra icing on top of the productivity cake, but it’s not without its flaws. Despite the raised screen angle being a godsend in allowing for better viewing angles, it’s still incredibly low in the body of the laptop. It’s good to use as for quick glances and the occasional long stretch, but it’s low placement is not the kindest on your neck leading long uses to result in some uncomfortable neck pain.

After marvelling and giddily giggling that a second screen like the ScreenPad Plus is even possible, it’s time to actually play some games. The unit we had our hands on was the 4K variant and, thankfully, a game had just released that was perfect for showing off just what it can do.

The staggering level of detail in 2020’s Microsoft Flight Simulator (which you can read about in our review here) looked utterly unbelievable. From the stunning, near-photorealistic cockpits to the coaxing coasts and fluffy clouds, the experience was truly breathtaking. Even more breathtaking was the Zephyrus Duo’s performance; on Ultra at a full-fat native 4K, the Zephyrus Duo handed in more than playable framerates on the year’s most demanding game. It felt like magic.

With our unit packing Intel’s i9 10980HK and the NVIDIA GeForce RTX 2080 Super, performance was brilliant, just as you would expect from top of the line mobile components. Competitive games, such as Counter Strike: Global Offensive, are capable of easily running at a consistent 120fps in full 4K. For a full technical beating, to really make the ROG Zephyrus Duo sing it’s chorus of fans, whacking everything up to max settings in Deus Ex Mankind Divided provided a pretty slideshow presentation at a staggering 9.4 FPS.

When not trying to push it to the extremes for the sake of testing, you can expect fantastic results from the Zephyrus Duo, so long as you play within the hardwares limits. Dropping down to 1080p and knocking off MSAA, for example, will deliver you that perfectly smooth 60pfs we all crave in Mankind Divided. The same goes for the Witcher 3: Wild hunt: you’ll get a certainly okay 38fps average at max settings in 4k, but dropping it down to 1080p will see you with a buttery smooth 86fps.

If you are into testing and showing off the fancy numbers you get from blisteringly quick benchmarks, then you won’t be disappointed. Attacking the i9 10980HK with Cinebench R15 will reward you with the powerful score of 1686 for multicore performance. When switching to 3D Mark, you’re able to make the most of the RTX 2080 Super with Max-Q Design inside in Port Royale, awarding the blistering score of 5470, as well as a beautiful display of RTX wizardry. In the more familiar benchmark of 3D Mark’s Fire Strike, you can still expect powerful results, with an overall score of 18775.

The typing experience does take some getting used to, but after getting past the offset placement, actually using the keyboard is very pleasant. Keys have satisfyingly smooth operation, with good spacing and travel, resulting in an overall feel that’s enjoyable for typing and gaming alike.

With a second screen and jam-packed internals, to make the most of the space, the keyboard has not only been shunted to the left to make space for a small and uncomfortable trackpad, but also down to the edges of the laptop itself. This can make typing, gaming or any Typing of the Dead in between downright difficult, even encroaching painful at times when the laptop is not positioned perfectly ergonomically.

Included in the luxurious box, there is thankfully an included palm rest, which solves this issue but it’s only useful when situated on a desk. Actually, using the Zephyrus Duo on your lap is rather ill advised. Not only is the keyboard difficultly positioned, with no tactility outside the buttons eons away at it’s base, but on your lap it’ll also get exceptionally toasty, so consider taping oven mitts to your legs beforehand.

When on a flat surface, the Zephyrus Duo manages its heat remarkably well. When running at full tilt, there are certainly some areas that you won’t want to touch. For example, reaching behind the raised ScreenPad is an exceptionally bad idea that I definitely didn’t do…  All that heat however, is dissipated impressively elsewhere, with only the top bezel of the laptop’s keyboard growing mildly hot to the touch. All other areas remain perfectly usable.

Should you be plugging a suite of accessories into the Zephyrus Duo, you will certainly find greater comfort. Thankfully, there is a boon of ports on offer, including full size HDMI and ethernet ports, a thunderbolt 3 USB C port, as well as the usual host of USB 3, headphone and microphone ports you’d expect to see.

When plugging in the all essential mouse to combat the Zephyrus Duo’s weak trackpad. However, you might find your hand getting a little toasty as the device’s rather active exhausts stream hot air from both sides. On one hand, it is pretty good for the cold winters ahead. 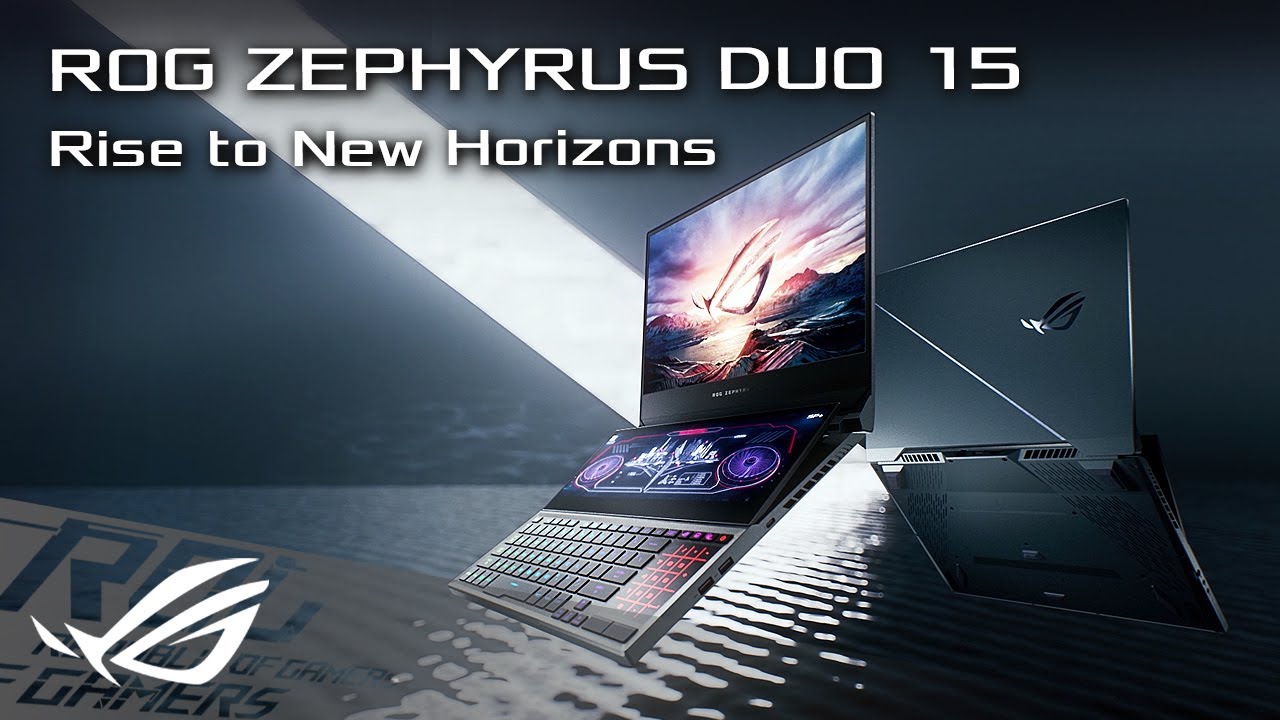 As the display, Asus claims that the laptop’s panel is factory calibrated for accuracy across 100% of the Adobe RGB color space to provide a true productivity workstation for graphic designers and video editors. We can’t verify this – we just didn’t have the kit on hand to test it properly – but colours are outstanding on the system’s main display.

What we can confirm is that everything looks phenomenal. Vibrant, vivid colours filled with the stunning detail of 4K make all content a pure pleasure to consume. Whether you’re just using the device for content consumption of taking the dive into content creation, the display’s accreditations are deserved.

Asus’ ROG Zephyrus Duo 15 is an outstanding machine. The dual screens are an absolute marvel and joy to use, a worthwhile innovation that boosts productivity and procrastination. With a phenomenal amount of portable gaming power underneath its sturdy and sleek exterior, there are few tasks that the Zephyrus Duo can’t handle. While all of this comes at a cost, the ROG Zephyrus Duo 15 is undoubtedly deserving at its place on top of the market.