The Assassin’s Creed series has been criticized in recent years for feeling stale and not shaking up the formula enough. Every game generally played the same, but that changes with Assassin’s Creed Origins. Completing revamping its combat and other gameplay mechanics, Origins is more akin to a role-playing game than the franchise has ever been before. If you fell off of the series awhile back, it’s definitely worth it to jump back in now.

When rumors swirled that Ubisoft wasn’t releasing a main Assassin’s Creed game in 2016, most didn’t believe them. I know I didn’t. The series has been annual since 2009 and made the company a ton of cash. To people’s surprise, the series did in fact skip last year, and I hope this is a tradition that Ubisoft keeps up with because Assassin’s Creed Origins is immensely better for it.

As its motto states, history is their playground, and ancient Egypt has been a highly requested fan favorite location for years now. Origins takes place in 49 BCE during the reign of Ptolemy XIII, Cleopatra’s younger brother. I know the first thing that comes to people’s minds when they hear Egypt is “desert,” but the Egypt recreated in Origins is so much more than that. One of the largest maps to date, Egypt is full of varied landscapes, from vast cities to the canyons surrounding them, and serene lakes to lush farming areas. It certainly has beautiful deserts with temple ruins scattered everywhere, but the amount of color in the game is outstanding, making Egypt feel truly vibrant. It’s a good thing that Origins has a built in photo mode because I’ve already taken dozens of snapshots. 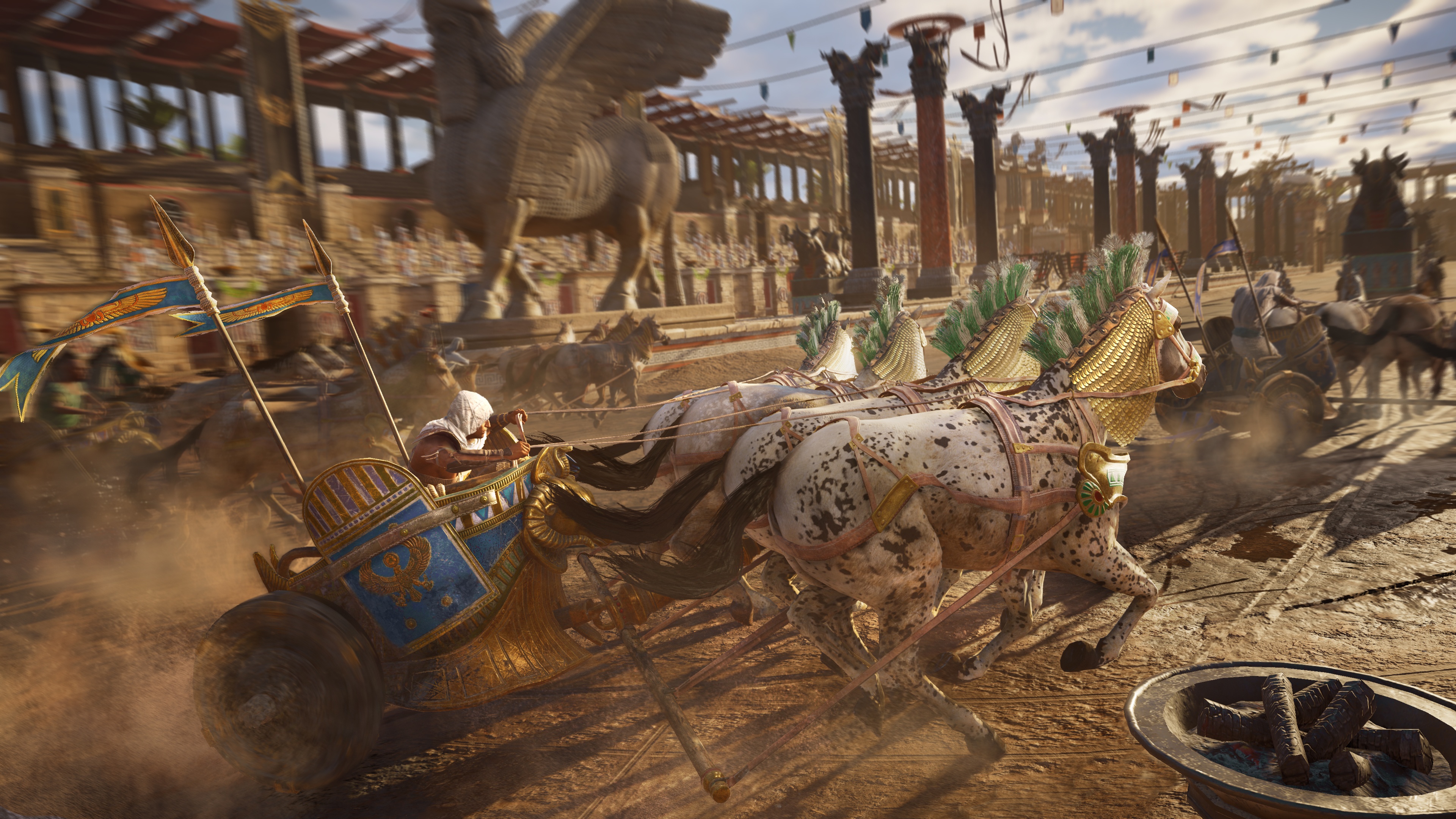 It isn’t only beautiful to look at, though. Origins is much more fun to play as you travel across Egypt. NPCs now have their own schedules and jobs. They’ll eat, sleep, hunt, work, and do all sorts of activities that make Egypt feel alive. It may seem like a minor change when you don’t interact with every NPC, but it does a huge service to its immersion. A day and night cycle now affects missions as well. A hideout may be less guarded at night when enemies are asleep, and during the day a target of yours may be travelling. This factors into how you approach side missions, which are more diverse than they’ve ever been.

I can’t overstate the breadth of Origins’ improvements. Your character, Bayek, has a level now, and he and his equipment must be upgraded for you to take on harder challenges. An enormous amount of weapons and shields are available to be purchased or found throughout the world, and they all have different stats attached to them that affect your attack and defensive capabilities. This is less like previous entries where certain pieces of equipment would be one rank higher, and more like what Skyrim and other RPGs offer. The depth that this system adds to the game creates a huge impact on your experience. Not only that, but Bayek has a true skill tree that can be fully upgraded if you level up enough. In addition to these changes, the combat was also completely overhauled. People always complained that the games were too easy, and Ubisoft seems to have gotten the message. The fight system used to be a paired animation system, meaning that the playable character and an enemy in close proximity would come together for an attack regardless of distance once the player pressed the button for it. This is no longer the case. Origins features a hit box–based system, putting a stronger emphasis on spatial awareness. With two base attacks—light and heavy—you’ll need to time your strikes and blocks carefully. A heavy swing means a longer animation, leaving you vulnerable to an attack. Don’t even try to go up against enemies at absurdly higher levels than you, because you will lose even if you aim for their head. I remember watching gameplay videos and scoffing at some of the players dying all the time when outnumbered, but it really is that hard if you take on a group of similar levelled enemies, especially with arrows being shot at you from all directions. That said, if you are a few levels above your enemies, you can slice through them like butter with little problem.

If you want to progress through the main story missions, you’ll need to do side activities to level up, but it is worth it. Bayek’s journey that leads to the formation of the Brotherhood is a tale that you are immediately invested in, even if the beginning of the game is a tad confusing with flashbacks. The Order of the Ancients, what would become the Templars, rule Egypt from the shadows, manipulating those in positions of power and influence. Bayek is set on getting revenge after a pivotal event in his life brought upon by the Order. The story and its assassination targets are heavily influenced by Egyptian culture and mythology, making this one of the richest games in the series in terms of narrative content. It’s also the perfect way to tie the First Civilization to the story as certain members of the Order of the Ancients appear to revere them as gods, or at least attempt to gather some divine power from them.

As someone who loves the modern day storyline in the Assassin’s Creed series, I have mixed feelings about how it was presented in Origins. The modern day narrative is an integral part of the franchise and is inextricably linked to its identity, but it has been incredibly disjointed and lacking direction since after Assassin’s Creed 3. Syndicate rectified this to an extent by bringing back some familiar characters and giving us a few cutscenes that pushed the story forward, but unfortunately it was unplayable. Origins has the opposite problem. It’s now playable with a named protagonist, something I am grateful for, but it lacks events of real importance. The ending of Syndicate is not directly addressed, and Origins yet again introduces new characters that we haven’t seen in previous games. This aspect of the series always seems to be one step forward, two steps back. I think giving us a playable protagonist again like Desmond will ultimately benefit the series, but Ubisoft really needs to figure out where they are taking the narrative, because I feel like I am just as in the dark as I was when I began the game.

Because Origins shows the founding of the Assassin’s Brotherhood as it was in the first game, some thought that it would retcon certain elements of the lore, such as the assassin Darius’ first recorded use of the hidden blade against Xerxes in 465 BCE, hundreds of years before the events of Origins. I can happily say that Ubisoft respects the lore as much as possible and many of these overlapping plot points are explained within the story. With the amount of expanded material in the franchise, it’s reasonable to expect some contradicting elements, but the team at Ubisoft Montreal does an admirable job adhering to their established lore.

While Bayek doesn’t quite beat out Ezio as my favorite Assassin, he comes damn close. Ezio may have been charismatic and charming, but Bayek is more of a relatable dad character. He jokes around, he has fun with his wife, he cares for those who cannot take care of themselves. All in all he’s a likeable character without a grating or annoying attitude. He’s one of the oldest assassins that we’ve played as (minus Altair in Revelations), and he has an air of maturity to him because of this. He’s not a pirate or a playboy, he has responsibilities that he takes seriously. You’ll also get to jump into Aya’s shoes in certain sections, and the first one may bring back some memories of Assassin’s Creed IV: Black Flag. The major supporting cast of characters, from their enemies to their allies, are all interesting to witness, partly because we are already familiar with some of them in history.

Assassin’s Creed Origins is what the series always wanted to be, capitalizing on all of its potential. Some missteps were taken, notably in regards to the present day story, but Origins is still one of the best Assassin’s Creed games ever, and certainly in recent years. This is exactly the entry that the franchise needed to be revitalized.