Aven Colony is all about finding humanity a home among the stars. Actually scratch that. That sounded like a commercial for Mass Effect: Andromeda. Aven Colony is all about building humanity a home among the stars! The title is an in-depth city simulator that doesn’t take place on Earth. The twist is that your city planning takes place on a rather hostile alien world known as Aven Prime. There are a lot of different environments as well as threats such a mammoth worms and other vile entities. If you preorder Aven Colony before its July 25 release date, you can explore the treacherous badlands of Cerulean Vale. This additional sandbox map features the harshest environment yet, and the greatest rewards.

The planet we have to colonize, Aven Prime, has deserts, tundras, and jungles light years from earth. Aven Colony puts you in charge of humanity’s first extrasolar settlement, where you build and expand your small colonies into massive, sprawling cities while dealing with the challenges faced when settling on a new world. The title is all about growth and managing resources. Unlike games like Cities: Skylines, you have to constantly take into account external threats and defense requirements.

Hostile alien creatures aren’t the only problems in Aven Prime. Some of the challenges include a low-oxygen atmosphere, extreme electrical storms, shard storms, dust devils, deadly toxic gas eruptions from geothermal vents, and days so long they have their own seasons. You’ll also encounter a variety of alien life forms including giant sandworms, deadly plague spores, and a vicious fungal infection known as The Creep. It’s quite terrible. The seasons are also a problem. The game features a fully functional day-night and seasonal cycle. During the winter Aven Prime freezes over and farms will not grow food and solar panels will generate far less electricity. You have to take action to deal with these issues. The title is surprisingly deep.

Settling a new world can be stressful. As a new Colony Governor, you’ll need to work overtime to help your colonists deal with their new environment. Using the 12 distinct overlay modes, you can mange your colony’s Crops, Citizens, Happiness, Crime, Air, Electricity, Employment, Resources, Commute, Structures, Drones, and Water. You’ll really have to work hard to earn the respect of your colonists, and rise in rank from Colony Governor to Expedition President! This is somewhat of a mini-game within the title. If you’ve played a game like Tropico 5 before, this mechanic should be somewhat familiar. 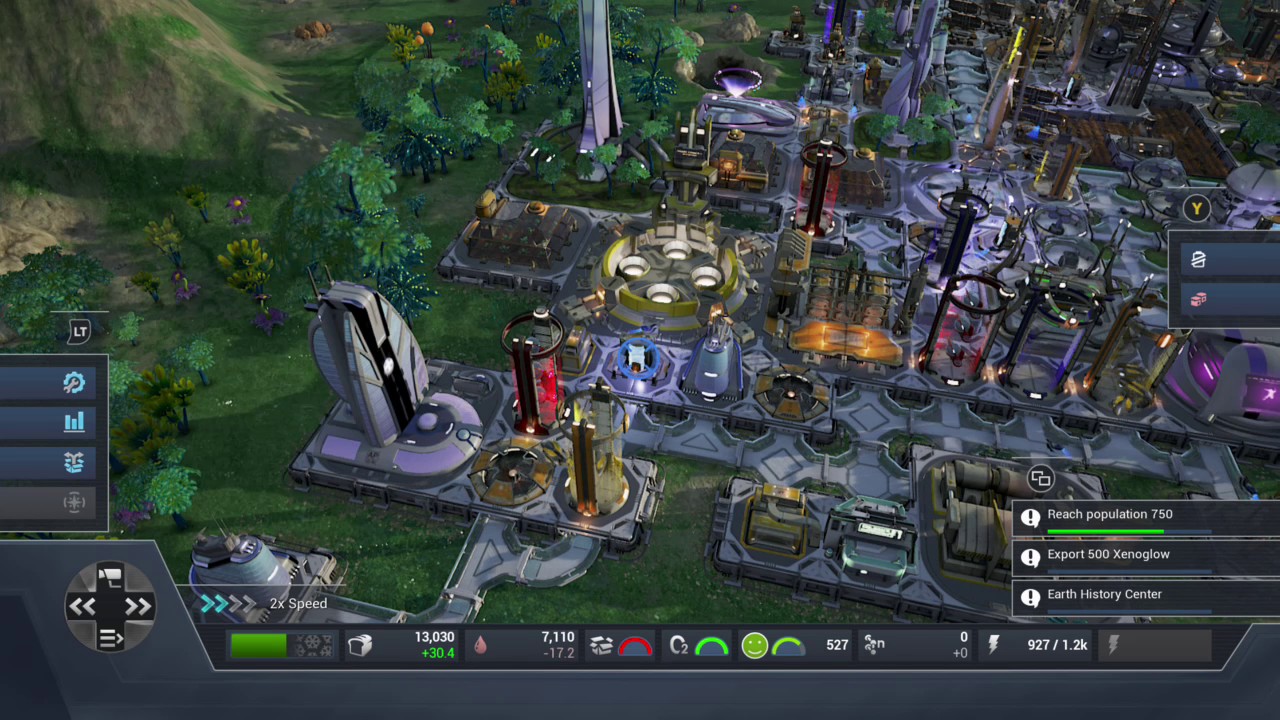 Unlike a traditional city-building game, Aven Colony features a proper campaign. The world of Aven Prime holds many secrets. You can play through a full single-player campaign and participate in a story that reveals some of the many secrets of this brave new world. While the story is obviously not that deep, it’s still a lot of fun.

Unlike traditional building materials, Aven Colony uses construction drones to build dozens of types of structures to house your colonists, establish trading routes, welcome immigrants and much more. You can even enhance your existing buildings through several upgrade tiers to push your colony to new heights. Upgrading is the key to success so remember that.

One of the most unique aspects of Aven Colony has to be the fact that you can explore alien structures and other technology from a bygone era. Deploy your crack team of pioneers to explore alien ruins, recover artifacts, repair crashed vessels and rescue lost explorers. Get ready to take on plague and creep spore nests whilst fending off splinter groups, rebels and Aven Prime’s remaining robot guardians which threaten your new civilization. No other city-building game has this many external factors you have to worry about. This is what sets Aven Colony apart.

From what we just told you, Aven Colony is easily worth the price of a full game. However, it only costs $27 if you preorder. From what we’ve played and know about the game, this experience rivals Cities: Skylines and Tropico 5. Its unique alien setting sets it apart from the others. If you love these types of games, you must get Aven Colony right now. It’s just that good!