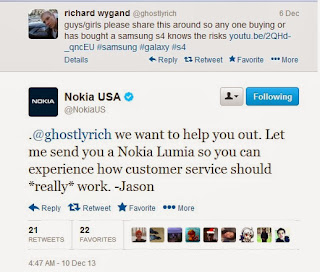 It seems Nokia is playing the game nicely. Nokia USA is offering a Lumia to Richard Wygand who recently got his Samsung Galaxy S4 fired up during charging. The issue got some attention recently when Richard posted about the issue in social networks.

On contacting Samsung, they agreed to replace the phone but they wanted him to remove the video and to agree with their terms. Richard wasn’t happy with the terms. Click here, if you want to read the full letter he received. It seems Samsung wants silence from his part and wants to cover the issue secretly. But the issue is no longer a secret! His Youtube video has now surpassed over 1 million views. Nokia somehow came to know about the situation and wants to show him how ‘CUSTOMER SERVICE SHOULD REALLY WORK’! with a free Lumia device.

Another smart move from Nokia US social media team. What do you think?

See the video after the break.