As the send-off to almost two decades of Kingdom Hearts story, Melody of Memory is remarkably sparse on new narrative content. Whereas previous games in the series would sprinkle cutscenes between their brisk gameplay scenarios, this recap of the franchise’s past keeps all story revelations to the very end of its journey, instead choosing to focus almost entirely on its satisfying musical gameplay.

On that front, Memory of Memory is comprised of a few different gameplay styles, all of which are variations of the same formula. The most common form of play is found in Field Battles, a true conversion of Kingdom Hearts’ core gameplay loop into that of a rhythm game. You’ll journey along a set track with your party of three characters, defeat Heartless, Nobodies and Unversed with some well-timed button prompts, all while auto-running around oddly-stitched together worlds from previous games in the series.

On the other hand, there are also Memory Dive stages that more closely resemble a traditional rhythm game. In this mode, you’ll hit or hold a button, or flick the analogue sticks to the correct prompts while an FMV related to the music plays in the background. Finally, there’s boss battles: they’re identical to the Memory Dives, but with an AI controlled party dodging enemy attacks and striking in the background based on your performance.

You’ll likely experience most of this for the first time in World Tour mode, the game’s story mode. In World Tour, Melody of Memories tasks players with experiencing abridged forms of every Kingdom Hearts story with long-standing character Kairi narrating the events of the games thus far.

If you’re a newcomer to the series, don’t expect this musical recap to help you completely understand the events of the series thus far. For newcomers, Melody of Memory does a pretty poor job of retelling the key events of every game; it would be more beneficial to just watch one of the many YouTube videos that recap the story instead. On the other hand, if you’re a long-time fan of the series looking for the new story content, I’m afraid you’ll have to wait until the final stretch of the World Tour mode.

For the first time in the series’ history, this spin-off firmly places gameplay in the limelight, making the plot a secondary concern. Kingdom Hearts veterans might have expected at least a few minutes of barely-comprehensible cutscenes after proceeding past the wonderfully jazzy title screen; instead, you are immediately thrust into the first Memory Dive stage before transitioning into the World Select screen, allowing you to select which specific world you want to explore.

Specific worlds will see a member of your party replaced with a Disney character that relates to that stage. Mulan will fight alongside you on The Land of Dragons, Simba will stride along in The Pride Lands, even King Mickey himself can play along if you use the right item before a stage. These additional party members are only really a temporary aesthetic change – but it’s a welcome one, considering there’s little variety in playable characters outside of four uneditable parties: Sora, Donald and Goofy; Roxas, Xion and Axel; Aqua, Ventus and Terra; and Riku, accompanied by two Dream Eaters.

While the original games’ worlds were enlivened by the fantastic melodies of Yoko Shimomura, Melody of Memory is tasked with editing those worlds to perfectly enhance the already existing songs. They’re designed wonderfully: each enemy feels deliberately placed in a way that makes them leap to life, their distinct animations attempting to distract you from perfect rhythm such as the overly bouncy Wight Knights. If you miss an enemy, it never feels like the fault of the game, it only makes you want to try harder. Additionally, the multitude of difficulty modes ensure that anyone can pick up and enjoy everything the game has to offer, with the One Button option allowing for extra accessibility – something that should always be praised as a step towards normalising accessibility options within the games industry.

Despite the lacklustre story, developer Indieszero has done a great job blending the JRPG mechanics of the Kingdom Hearts series with the rhythm-based gameplay of Melody of Memory. While not essential for progression, character parties have their own stats and levels that provide small gameplay benefit. Even synthesis returns: completing levels award you with materials to craft single-use consumables such as potions to restore HP or even full Memory Dive stages to play through! Just like the main games, the Moogle that crafts your items also levels up over time, providing more options for crafting.

Melody of Memories even offers a selection of other modes to play through. There’s, of course, a basic track selection mode where all the stages unlocked thus far can be easily accessed and played in any difficulty at the press of a button. But then there’s an online mode where you’ll attempt to screw over your enemy with a variety of modifiers such as disappearing enemies, vanishing button prompts, fake prompts and enemies that obscure parts of the screen when hit. These small twists elevate the gameplay into a competitive rhythmic ability, where you get rewarded regardless of whether you win or lose. There’s also an offline co-op mode, but I unfortunately was not able to test it for the review. 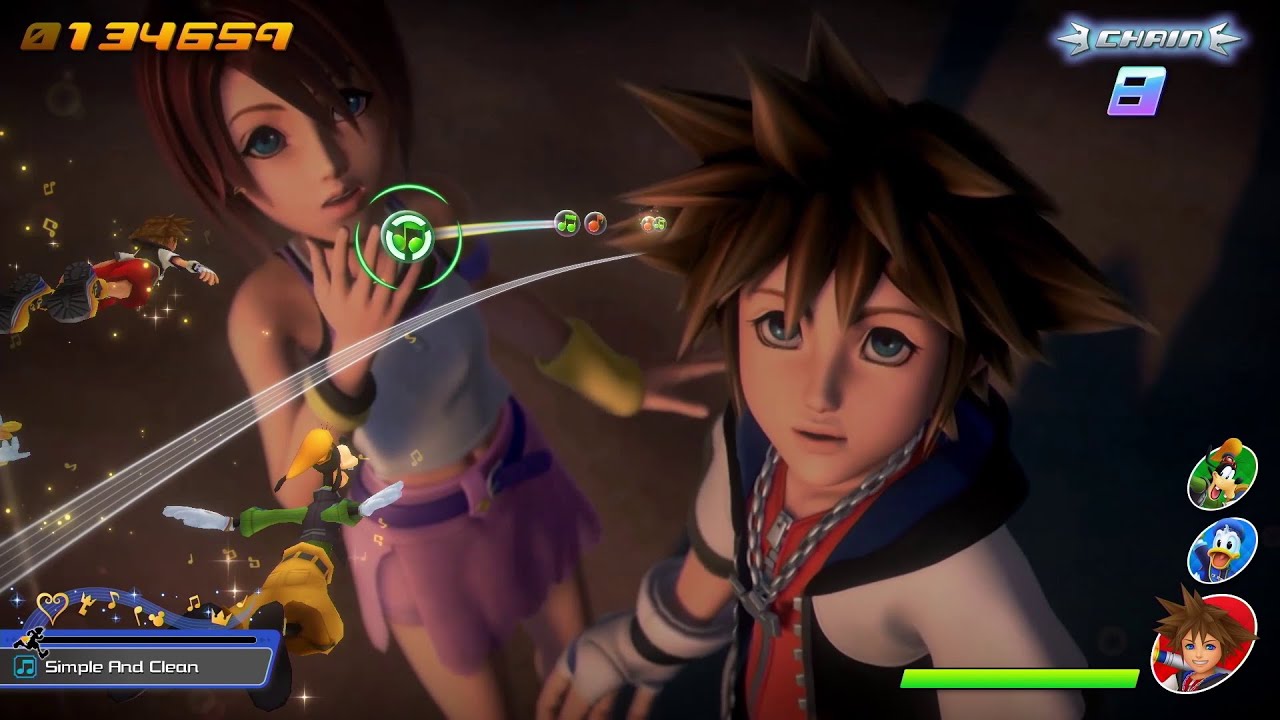 Overall, Kingdom Hearts: Melody of Memory is a fantastic epilogue to the current chapter of the Kingdom Hearts series that I can wholeheartedly recommend to rhythm game fans and Kingdom Hearts fans alike. It’s pick-up-and-play gameplay style even makes it a welcoming game for newcomers to the series – as long as they’re comfortable with not understanding the story, that is. I couldn’t think of a better way to celebrate the musical legacy of this almost two decade-old series. Now if you’ll excuse me, I’m off to play “This is Halloween” for the hundredth time.