Google has finally launched the Pixel 6 and 6 Pro smartphones, and while we’ll have to wait a few more days to know about its performance, users are already upset over Google’s update commitment for the Pixel phones.

There were rumors that Google would offer a total of five years of software updates, but it seems that the rumors weren’t completely true. According to Google, the company is committed to provide major software updates until at least October 2024—if you do the math, the company is promising only three major Android updates for the Pixel 6 series. Add to that, Pixel 6 and 6 Pro users will get two extended years of security patches from Google. Long story short, you’re getting three major Android updates, and five years of security updates.

“Users will still get at least 3 years of OS updates, after which we’re committing to ensure that Pixels will stay up-to-date and secure,” Google tells The Verge. “The frequency and categories of updates will depend on the capabilities and needs of the hardware.” 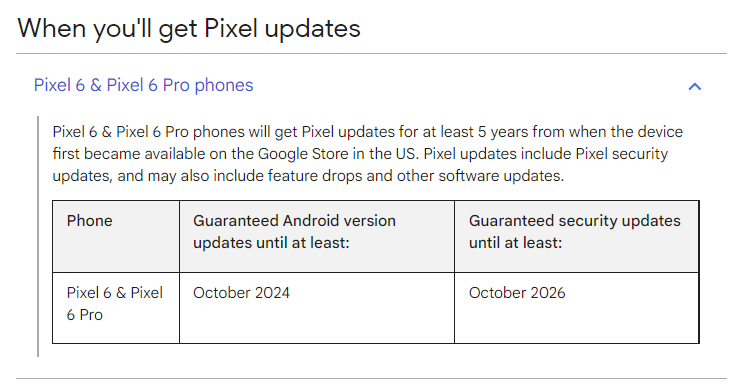 Google can have a change of heart later and may extend the update commitment from from three years to five years. But we haven’t seen this yet from a company like Google,so don’t raise your hopes.

As things stand now, Apple is the company to beat when it comes to software updates. While the rumors of five years of software updates led people to believe that Google might be only company competing with Apple on this front, the official clarification from the Mountain View company left them disappointed.

Are you planning to get the Pixel 6 or 6 Pro? If yes., are you happy with three major Android updates or you want more? Let’s know your thoughts in the comments.