While Microsoft’s commitment to HoloLens is uncertain, it seems Ford at the very least found it useful enough to expand their use of the unique Mixed Reality device.

On the Microsoft blog, the company announced that Ford is expanding testing of Microsoft HoloLens after a successful pilot in 2016 at their Design Center. Ford found the headset improved creativity, collaboration and ultimately time to market.

Using HoloLens the design team at Ford were able to make the thousands of design decisions needed for each vehicle faster, and collaborate better with their partners in engineering and management. They were also able to use legacy tools such as clay models less often, allowing them to create and iterate more freely and quickly.  In their early work in grille theme development, for example, they proved that what used to take days with multiple physical models could take only hours using a HoloLens and one physical model.

“It’s amazing that we can combine the old and new – clay models and holograms in a way that both saves time and allows designers to experiment and iterate quickly, to dream up even more stylish and clever vehicles. Microsoft HoloLens is a powerful tool for designers as we continue to reimagine vehicles and mobility experiences in fast changing times,” said Moray Callum, vice president, Design.

Jim Holland, Ford Vice President, Vehicle Components and Systems Engineering, gives another example of how the HoloLens changed their workflow, in an accompanying Medium post.

The headset projects holographic images onto the user’s field of view. It then uses sensors to keep those images in place as the user changes their viewing angle, or as they physically walk around a clay model or vehicle. The headset also lets designers quickly scroll through multiple design options with a simple hand motion, making it easy for teams to analyze grille designs or side mirrors in a matter of minutes or hours.
It’s hard to overstate how radical this is. When developing a computer-designed part or crafting a full-size clay model, it could take days or weeks to finally look at what the designer wanted to see. Even the sketching process can soak up weeks of work before the team moves forward with an idea or determines it might not be feasible.
With a vehicle’s side mirror, for example, we can use HoloLens to adjust the mirror size and shape in near-real time. At the same time, engineers can see through the headsets what drivers see when they look through the mirrors. All of a sudden, our engineers do not have to create a physical model to investigate visibility — something that usually takes days or weeks –to understand the visibility implications of its design.
With HoloLens, we can go from a digital creation to looking at it in full scale and analyzing its effects much, much faster. We can look at the hologram blended with the vehicle in any direction, too — that’s not something you can do on a computer screen.

The HoloLens also allows teams to more easily share confidential design decisions without the risk of them leaking easily to outsiders.

“Microsoft HoloLens allows a whole team of people to collaborate, share and look at ideas together. It is exciting because it helps our designers and engineers communicate effectively and ideate to see the future earlier in the process by mixing virtual and physical models. This allows great freedom and efficiency in how prototypes are created or changed,” said Elizabeth Baron, Ford virtual reality and advanced visualization technical specialist.

See the device in action at Ford in Microsoft’s video below. 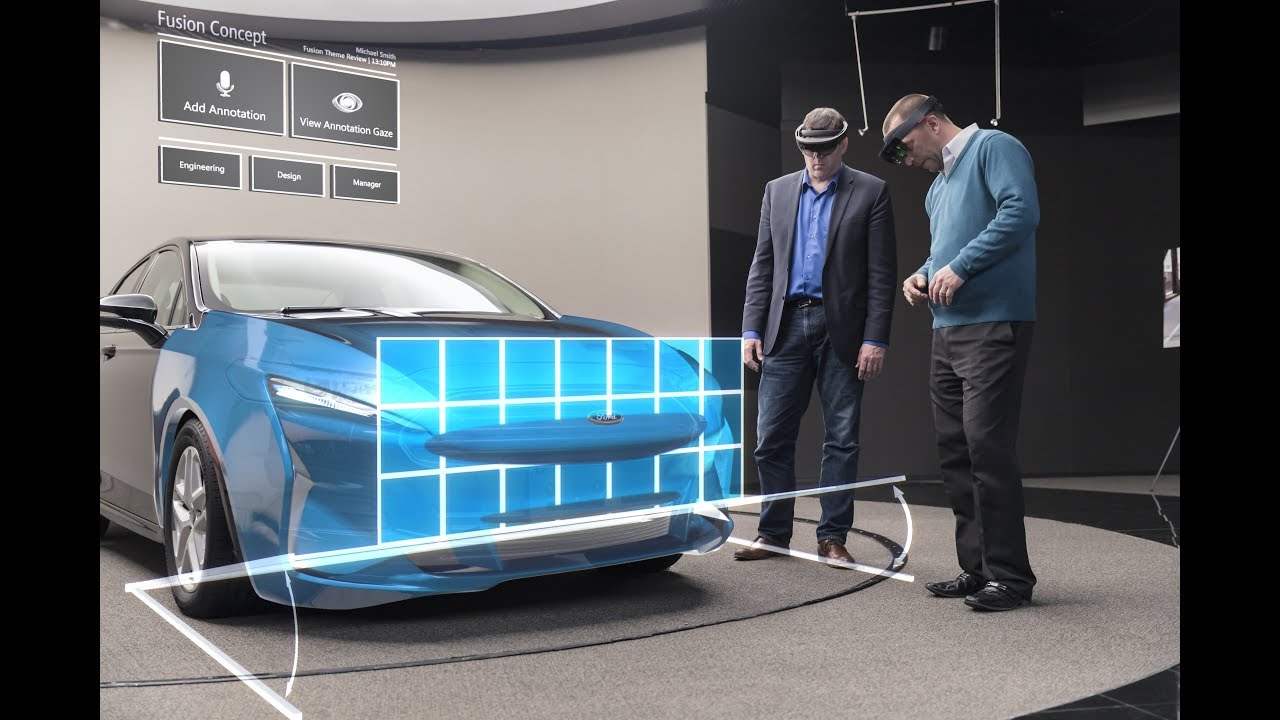