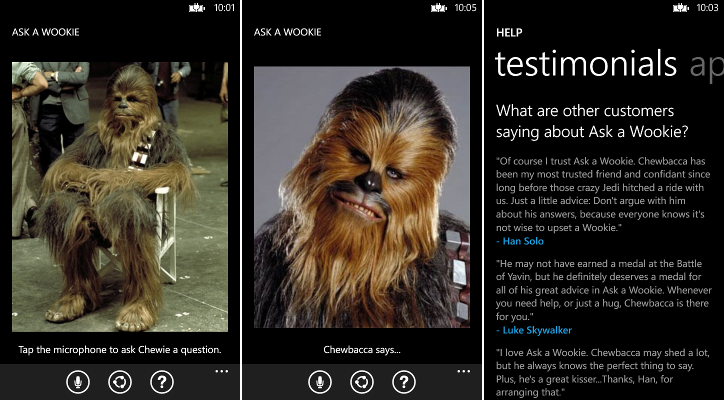 Chewbacca didn’t have his fair share of dialogue in the Star Wars saga, but that doesn’t mean he didn’t have a lot to say. Ask a Wookie gives him a chance to finally speak his mind. Ask him a question, and prepare to be amazed by his honest and insightful answers.

What are other customers saying about Ask a Wookie?

“Of course I trust Ask a Wookie. Chewbacca has been my most trusted friend and confidant since long before those crazy Jedi hitched a ride with us. Just a little advice: Don’t argue with him about his answers, because everyone knows it’s not wise to upset a Wookie.”
– Han Solo

“He may not have earned a medal at the Battle of Yavin, but he definitely deserves a medal for all of his great advice in Ask a Wookie. Whenever you need help, or just a hug, Chewbacca is there for you.”
– Luke Skywalker

“I love Ask a Wookie. Chewbacca may shed a lot, but he always knows the perfect thing to say. Plus, he’s a great kisser…Thanks, Han, for arranging that.”
– Princess Leia Organa

“Very wise Chewbacca is. Use Ask a Wookie often and trust his advice, you will. Miss him, I do.”
– Yoda

“It’s no secret how I feel about Wookies, but I am working on my anger issues. Ask a Wookie has helped me see that not all Wookies are mindless animals. I might even stop force choking them.”
– Anakin Skywalker AKA Darth Vader

“Chewbacca may be a an overgrown mop-head, but he really does love to help others. I suggest you use Ask a Wookie. And don’t worry, I’m pretty sure Han was only joking about Wookies pulling people’s arms out of their sockets.”
– C-3PO

Please feel free to submit feedback and suggestions via the in-app links.

For more screenshots and a link to download the free version (no ads), please click here or scan the QRCode.